One of the things that’s easy to take for granted in this part of the world, is having access to fresh green vegetables all year round.

If one has space to grow their own, even better. If you do not and have to buy, it is ok as they are not only inexpensive, but come in many different varieties to please different palates.

Amaranth leaves are more commonly known in Uganda as “Dodo” and in Kenya as “terere” or “mchicha.” It is on rotation in our meals a lot. It is rich in vitamins, easy to digest, low in calories and is a great immunity booster.

In this simple recipe, I used red amaranth leaves which are also rich in antioxidants, and gave the veggie mix a bright red color. Green amaranth leaves can work just as well too, minus the red colour obviously.

Let us get started:-

⁃ Half a head of cabbage, chopped.

⁃ I small bunch of amaranth leaves. I used red but green can work well too.

⁃ 1 tsp of crushed ginger and garlic.

⁃ Salt and pepper to taste.

⁃ A pinch of garam masala.

⁃ Clean and chop all vegetables.

⁃ Heat pan, add ghee and mustard seeds. Once they sizzle a bit, add the onion and let cook till it is soft and translucent.

⁃ Add the ginger garlic paste and mix in well.

Once it’s cooked a bit add the tomatoes and cumin / coriander powder as well as some salt and pepper.

⁃ Let the tomatoes cook down then add the veggies.

Mix well and let cook for not more than ten minutes. You don’t want to overcook them. Leave uncovered.

⁃ Check your seasoning and add the garam and squeeze half a lemon over the veggies.

Serve hot with rice, ugali or chapati. It’s a perfect side dish but also yummy and healthy enough on its own.

Definitely worth a try don’t you think?

Try and let me know how yours turned out. 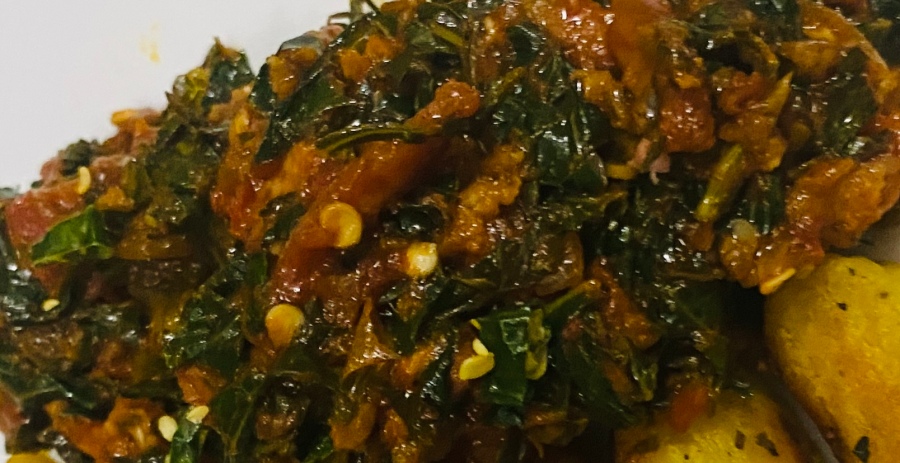 Sukuma wiki aka collard greens are quite popular in East Africa. It is mostly had with ugali (steamed cornmeal) and fried with onions, tomatoes and spices of choice. It is also a great side dish for meat dishes.

As it is easily available and cheap, it can get boring fast, so one has to look for ways to spice it up. Like we did here with bacon.

You can also mix it up with Swiss chard, cowpea leaves or amaranth greens.

This is quick side dish that is easy to make and so delicious. If one can get younger, tender sukuma greens it is even better as they cook fast and are tastier than the big leafed mature ones.

For this recipe we will need:-

Chop your bacon up and add to a heated pan for it to render its fat.

Add oil to the same pan, followed by the onion and garlic.

Once softened, add the grated tomato and bell pepper mix, as well as the paprika, and sugar, if using. Cover and let cook down till its a thick sauce.

Do not forget your seasoning.

Once tomatoes have cooked down, add the greens and increase heat. Let them cook for about 8 minutes till tender. They will shrink down fast, so keep that in mind when seasoning.

Once greens are cooked, add in the bacon you had set aside and mix it in well.

Last goes the squeeze of lemon and turn off the heat.

Let it rest a short while before serving, so the flavours can meld in well.

(You can add in cayenne or hot pepper if no kids will eat it).

This is a great side dish for ugali, mashed potatoes or chapati.

It is tasty, easy to make, colourful and smells so good!

Please try it and let me know how it turned out.

French beans aka green beans aka haricot vert are usually had as side dishes, steamed or sautéed. Here is a simple recipe that enables them shine as a main vegetable dish.

Green beans are known as ‘miciri’ or ‘mishiri’ in my mother tongue and are usually chopped and added to a stew with meat (beef) carrot and potatoes.

I however prefer them a bit bigger in size and crunchy too, cooked through but with some bite to them.

They are rich in various vitamins, such as Vitamins K and C, also rich in folate, fiber, and calcium among other nutritional benefits.

They are also easily available and affordable in Kenya and Uganda. And are one of Kenya’s main horticultural export crops.

My son loves them. Whether as a saucy curry, sautéed with some butter, steamed or even roasted with some carrots there is no shortage of ways to get your family to have and love this vegetable.

3. Two large cloves of garlic. (Use local, it has better flavour).

5. Salt and pepper to taste.

Heat your pan and add the oil and mustard seeds, then the onion.

Let the onion cook till a bit brown and add your minced garlic.

Add the ground spices and mix well till they release their flavours then add the tomatoes, and some salt.

Lower heat and cover. Let the tomatoes cook down into a mushy sauce.

Cover and cook on low for ten minutes. If you want them more tender cook for longer but not too long as they get chewy. Ten to twelve minutes are just right for me.

Check seasoning and serve hot. You can have it as a side or as a main vegetable dish. I had mine with some aromatic rice.

Give it a try and have your French beans in a different way. You will not regret it. 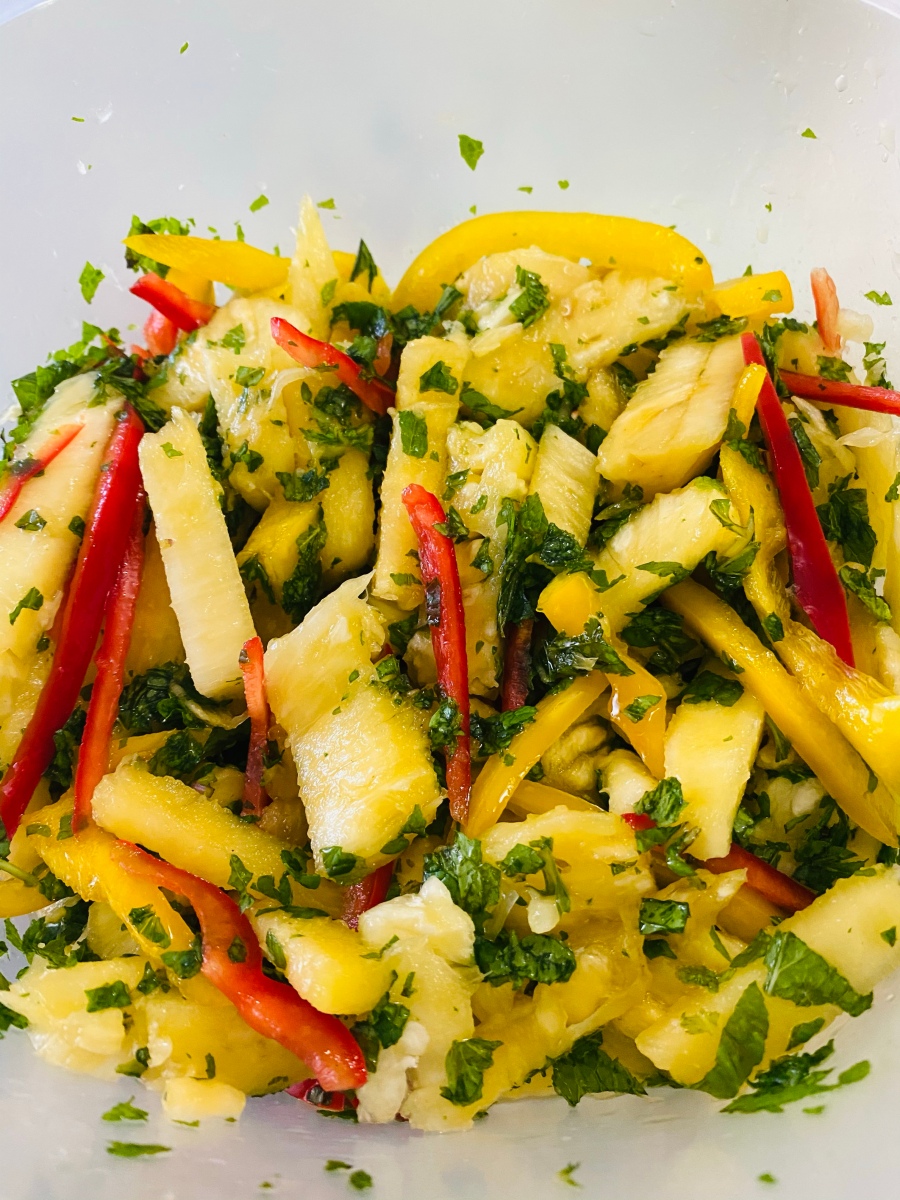 Pineapple and mint always go well together. In juice, in a smoothie and now in this refreshing salad that is another great side dish to add to your recipe collection.

All you will need for this simple and tasty salad are:-

The salad goes well on its own or as an accompaniment to grilled chicken.

Try it and let me know what you think.

This dish makes me nostalgic of my uni days when I’d scour through cookbooks filled with recipes, copy some and try them out at home over the weekend. Clearly I didn’t have an active social life back then. 😆

The first recipe I ever saw that called for peanut sauce in greens was from Southern Africa, using pumpkin leaves, which I just had to try out. Thankfully pumpkin leaves were available in our garden and I’ve never forgotten the creamy deliciousness I enjoyed when I attempted the dish.

I like making this as a side dish for ugali. But it can work with other mains as well.

I like amaranth as it’s one of those plants you can consume the grains and the leaves, the grains are ground into flour to make porridge, or puffed to make breakfast cereal, or pressed with honey into cereal bars that make a great snack for kids and adults too. It is easily available and affordable, there is no excuse to not include it in your diet.

Amaranth is not hard to grow and back home grows wild in the farm. They come in green and red varieties.

Terere aka “dodo” as it is known here in Kampala is a nutrient powerhouse, despite being viewed as a lowly vegetable by many. It is high in fiber and iron, rich in vitamin A, protein, calcium, lysine (which enables the body to absorb calcium among other benefits), as well as rich in various vitamins and minerals.

In this recipe, I used two bunches of green amaranth leaves and one bunch of Swiss chard. One onion, three cloves garlic minced, one sliced tomato, and 1and a half heaped tbsp peanut sauce mixed with a bit of water to make a paste, salt and pepper to taste. Spices used were a pinch of paprika but this is optional.

Clean your greens, remove the thick stalks and chop them roughly. Set aside in a colander.

Mix the peanut butter and half a cup of water in a bowl. Till it’s like a smooth porridge.

Heat one tablespoon of oil in a pan. Fry the onion and garlic till soft.

Add the tomatoes and spice and mix well with a pinch of salt.

Once tomatoes are soft, add the greens and mix well.

Once wilted, add the sauce.

Simmer for about 10 minutes. The vegetables will release their water and mix with the peanut sauce into a thick sauce and be tender.

Note: The younger the veggies, the shorter the cooking time as you do not want to overcook them. I like them with some bit of bite left.

Use good quality peanut butter preferably with no added sugar. I like using a local brand that mixes in sesame seeds to them that makes it darker in colour but also adds more flavour.

Serve your vegetables hot with your main of choice. I like having them with ugali and avocado slices on the side. Yum!

Duplication of this material without permission from this site’s author is strictly prohibited.

Excerpts and links may be used, as long as full and clear credit is given to the author.